It’s been a crazy few months of moving house into our new condo. Aside from all the hustle and bustle of the move, I’ve discovered joy in a new hobby! And that’s collecting and growing plants.

I’ve always fancied having my own herb garden one day, and even before the move, I have already been planning how to create my very own sky garden. 🌱My balcony isn’t very large but it is spacious enough to house at least 30 small to medium pots of plants, and maybe a large one or two.

I planned to collect a bunch of edible herbs so that I can save money and not waste a big bunch of veggies/herbs that I’m unable to finish before they spoil in my fridge (usually mint, basil, spring onions and coriander). So I went to Sungai Buloh (where all the plant lovers go) to get my pots of affordable herbs. I started out with just the few basic stuff that I use often: Sweet basil, cili padi, chives and mint.

Later on, I learned a little more about growing other herbs that are useful for culinary purposes. Some kind gardeners from various Facebook groups have deigned to share their plant cuttings with me, which I have then propagated in water and soil. Below is a list of plants that I am propagating, and how to do so. 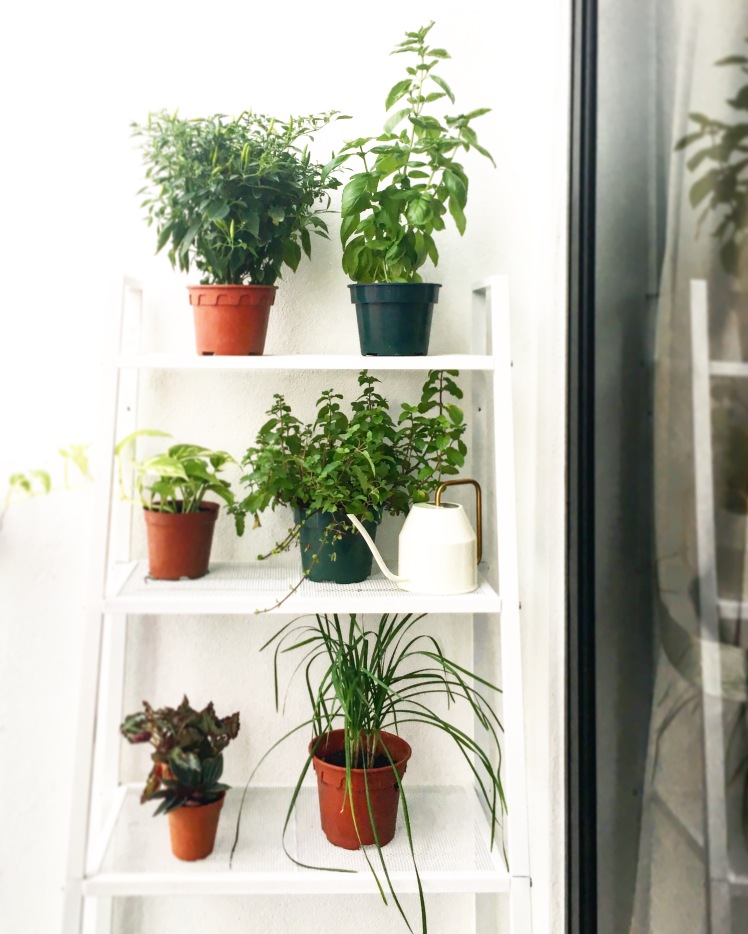 My existing plant has been attached by tiny yellow aphids which were slowly causing the leaves to turn brown. In order to ensure that I have a fresh batch of basil, in case this one dies, I have cut off 2 of its top stems to propagate in water (change water everyday). You will need to remove the bottom leaves as submerged leaves can rot underwater. It took about 2 weeks before I finally saw some little roots showing. 🙌🏼 Both cuttings are now steadily growing their roots day by day. After roots are about 3 inches long, they should be ready to go into soil.

Sweet basil requires particular care with watering, not too dry and not too wet. I started by watering mine only once a day and it began to dry out and the leaves started to droop (from humid Malaysian weather), so I learnt that watering once in the morning and once in the evening works best. If the weather is rainy/gloomy, I would skip the evening watering if the soil still feels damp.

This has got to be one of the best plants to propagate for beginners because they are FAST growing! I did not have a lemongrass plant, but what I had were a few leftover stalks from making tom yum. I took one of the stalks and placed it in water. Within a few days, a bright green blade began to shoot out from the top of the cut stalk. All I needed to do was change the water each day, and the leaf grew by an inch each day. Roots were also starting to form at the bottom of the stalk. After 2 weeks, I already have 4 long blades of leaf (and a few baby leaves) sprouting from the stem, and about 2-3 inches of root. As my jar is small, I decided to plant it immediately into soil.

You would need to only water it once daily as they are quite hardy, but I give it a good long drink in the mornings. The leaves can be cut, dried and used as tea leaves, while the stalk itself has the best flavour for tom yum soup.

I bought my plant at a nursery, and so far all its green chillies have been turning red and raining me with a bountiful harvest of more chillies than I could eat. I have watered them consistently twice a day, and harvest the red chillies every 2 days to prevent them from rotting. New baby chillies are coming out each day. Cili padi is probably one of the easier plants to grow – just slice open a few chillies and take out the seeds. I’ve tried 2 methods – the soil and wet paper towel method, both works really well. You can expect to see a few shoots after 10 days. However, it is best to plant more as out of my 30 seeds, only 2 sprouted. Once you have a baby shoot with green leaves, move them into a pot with nutrient rich soil.

My seedlings are still small, so I may have to wait some time before I can write a separate, full post about it. So far I have been buying other variants of chillies (pale green and purple) and am trying to germinate the seeds for sowing so that I have a few variants in my collection (as you can tell, I love spicy food!)

These are pretty easy going plants. Water them once or twice a day, no issues. Feed them or don’t, they will still grow. Because my pot is slowly being overgrown, and I don’t eat mint all the time, I have been pruning my plant and giving away cuttings. I also propagated 3 cuttings and find that they root very easily. Not only do they root, they sprout fresh green stalks with baby leaves very quickly too! Once their roots are about 3 inches long, I will be planting them in soil. Word of caution, they do grow and spread very quickly, so they should be potted and not left to grow freely.

I have also been given a cutting for a species of Watermint, and it has finally rooted after 2 weeks of propagating in water. I can’t tell you much about them yet but will probably write a separate post on mint later on.

One of my favorite herbs that always reminds me of pizza whenever I smell it. It’s much easier to grow them from cuttings than seed (as it would take a long time). I was given a cutting and it is the only plant I had success with from planting directly into soil. After 2 weeks of being in soil cupped in an egg carton, I dug it up to see that it has sprouted a few baby roots, and moved it to its own pot.

I also discovered that my plant is a Cuban Oregano, which is quite a different variety from the usual Greek Oregano. It has rounder leaves and a stronger smell.

A kind soul gave me cuttings of two varieties – one green and the other variegated with white patterns on the leaf’s edges. I have since propagated them in water and both have rooted pretty quickly. After 2 weeks, I have planted them in soil, and waiting to see if more leaves and stems appear. Indian borage is hailed as the ‘indian oregano’ due to its scent and flavour, but is also popularly used to cure coughs in Asian culture.

I also tried propagating it with the leaves (which I had to snap off when propagating in water, to avoid the bottom leaves from rotting) – and baby roots appeared too! This is a pretty easy plant to propagate and can be easily shared with others.

So far, these are all I have. I’m looking forward to adding more herbs to my garden as I go on. Right now, my only issue is battling with ants and aphids and new bugs every week. Wish me luck! 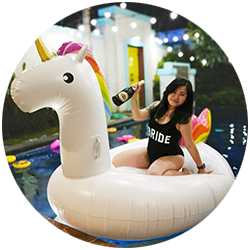 My super cute #RhaphidophoraTetrasperma aka the mini monstera. It’s native to Malaysia and Thailand so it’s not as crazy expensive to get them here as compared to western continents where prices are MAD! In my opinion, you can never have too many split leaves in a home. 💚 #urbanjunglehome
Finally, a plant that isn’t all green. These look enchantingly like purple butterflies🦋 and they even open & close their leaves that way too based on the light. #OxalisTriangularis #urbanjunglehome
My #IKEASOCKER greenhouse has been set up with new tenants. 🌿🌱🍃☘️🌵 I’m planning to fill it up with plants that are being propagated, seedlings or freshly planted greenies. #nowpropagating #urbanjunglehome
Plants don’t always remain beautiful - that’s nature. Which is why it’s important to always document their best looking selves whenever possible and enjoy it while it lasts. #MonsteraAdansonii
Guardian of the greens. #ReikoTheCat
Another wish list plant 🌱 acquired! The very unique #AlocasiaPolly with beautiful, dark green leaves and contrasting white veins. #urbanjunglehome
Our first Xmas tree 🎄in our new home is now up! Not your traditional fir tree (thanks to our cat) but it’s prettier than I thought it would be - plus it saves us floor space! #notachristmastree
I really hate it when my #monsteradeliciosa sprawls out in all directions, so I had to stake him with a bamboo stick 🎋 to keep him upright and handsome. #urbanjunglehome
Pretty much in 💚 with my #PhilodendronBurleMarx which was a beautiful gift from a fellow #plantlover at a recent gathering. #urbanjunglehome