If you haven’t heard of the pokē bowl yet (pronounced poh-keh), you probably will soon. The pokē bowl trend has ben sweeping across the USA and I daresay it would soon hit Malaysian shores where poke bowl shops will be all the rage later this year.

What is it though?

It’s traditionally a Hawaiian dish that is a combination of raw fish, soy sauce, rice and veggies. I don’t know about you, but it sounds pretty Japanese to me. I mean, it’s been around for ages, just that it’s been called various Japanese names. However, there is a slight difference in the method of preparation and ingredients in the Hawaiian style.

>> Learn how to make makimono sushi <<

The pokē bowl is both a hot & cold dish – hot rice at the bottom, topped with cold raw fish and greens. It’s pretty healthy to be honest. I have decided to make my own, and see what the fuss is all about. You can find the recipe at the bottom of this post.

Making it the healthiest option possible, I have decided to swap out the white rice for brown. It’s also one of the easiest things to make, if you minus the rice’s cooking time, it literally takes 15 minutes to put together. But I have to warn you, purchasing a small amount of sashimi just for this cost A LOT. It’s always better to buy in large quantities (it’s cheaper that way) and have a pokē party with everyone. 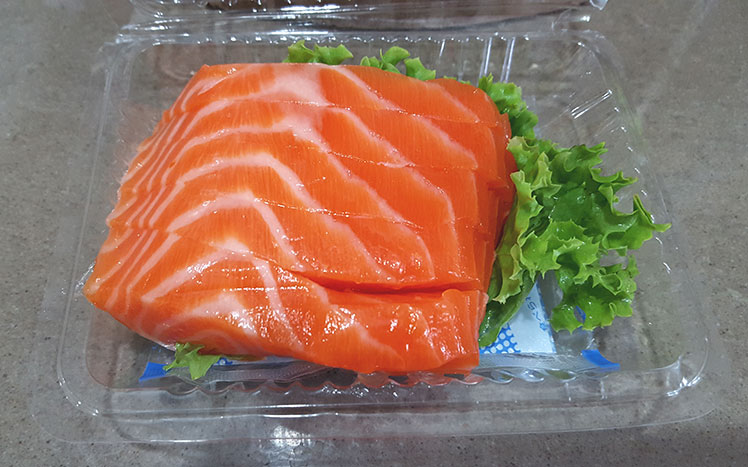 Soy sauce or sea salt is what the Hawaiians traditionally use, but the trend now has other additions like chilli flakes (for a spicy touch), furikake and even sesame oil for more flavour. Personally, I prefer just ponzu (citrus soy sauce) on its own for flavour, but a pokē bowl is always open to customization. It is also more popularly eaten with ahi (raw tuna) rather than salmon.

I use this photo without the nori because I found that I had sliced way too many and it covered the entire bowl. Still delicious though, so don’t skip the nori!